More and more, women rec hockey players are finding their way to the ice alongside their male counterparts. We recently caught up with Jasmine Sandler, a digital marketing specialist and captain of her men’s hockey team, to ask her to share her story.

How did you get into hockey?

My dad took me to a Bruins game when I was one year old, and I never looked back. I have been obsessed with hockey ever since. Growing up, I watched every Bruins game no matter what and went to many games, although I didn’t start paying ice hockey until later in life. (I owned a horse, which took up all my time as a kid.)

At what age did you begin to play hockey?

I played street and roller hockey most of my early life. I didn’t start playing on the ice until I was 25.

Are you on an all-female or all-male rec hockey team (or mixed)?

I am the captain of a mostly male team, and I play with all women rec hockey players as a guest in games and some tournaments.

The reason I like playing with guys is that it steps up my game. I am probably too serious about my hockey. I want to be the absolute best. With women it is much more fun, for sure. And they smell better too!

How do you deal with the ‘testosterone’ factor?

I grew up with two brothers and my fiancé is Peruvian. So there’s enough testosterone there to fill up the world.

How do you deal with the locker room, i.e., talk, changing, etc.?

I have my team arrive early so I can lead a team talk and arrange lines before the game and before they get dressed. I have my own locker room for changing into my gear.

Is there anything that you really like about playing on a team with all guys (or women)?

With the guys, I love the action and playing hard. It’s what I enjoy. I also like playing up a level. With the girls, I like that we play more as a team. And winning feels much better there.

Is there anything that you really dislike about playing on a rec hockey team with all guys (or women)?

YES. The guys kind of stick to themselves and I feel like I have to prove myself (which is ridiculous, in my opinion). Not all the guys, but most. On the bench it feels like the guys keep to themselves and take advice from the other guys. Also, the guys try to give me advice, but I only take it from those who are really good.

Playing with women can be too slow for me, and they also can be catty and play dumb jealousy games.

I love hockey. I would love to leverage my skills as a Digital Marketing Expert with my passion for hockey in some way. I am trying! I wish that I had no dislikes per above on either side. Hopefully this will change over time and maybe I can start to make a better difference! Jasmine Sandler is a global keynote speaker, trainer, author and consultant in Digital Marketing and Social Selling for global organizations. She is the founder and CEO of Agent-cy Online Marketing, a Manhattan-based online branding agency, specializing in SEO since 2006. She has been named as a Top 40 Global Digital Marketing Strategist in the industry, Top SEO consultant on Twitter, and Top 17 Digital Influencers in Content Marketing. She is captain of her hockey team at City Ice Pavilion in Queens, NY, and sometimes plays with the Westchester Wildcats and Ice Breakers women’s teams. 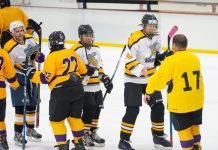