If you’re a new hockey player or considering becoming one, here’s what you need to know

The sport of ice hockey has become increasingly popular among recreational players of all ages. The game has an irresistible pull, with most playing well into their later years.

If you’re a new hockey player (or someone who’s considering becoming one) who is itching to suit up and play, there are some things you need to know. To begin with, hockey lessons are a good place to start. There are plenty of leagues that offer a number of instructional sessions to teach you the basics. Often these are followed by a set number of games against other beginner players.

Do: Get fitted for gear and be open to used gear

For a new hockey player who is looking into buying equipment for the first time, it’s a good idea for you to visit a pro shop to get outfitted properly. Having poorly fitting gear not only takes the fun out of the game, it can increase the chance of injury.

That being said, many shops will stock used gear in good condition. If you’re not 100% committed to playing for good, it’s probably best that you buy mostly used gear and fill in the gaps with newer stuff as you see fit. This can reduce the cost of entry considerably.

Don’t: Forget to air out your bag after play—and check your bag before leaving for a game!

There’s nothing more stinky in the sports world than a wet, sweaty hockey bag. Don’t be that guy. Open your bag after you play and spread your gear to let it dry and “off-gas” some of the body odor.

Some manufacturers make mesh bags (such as the Grit AirBox) to aid in the gear-drying process without you having to spread out your gear. Some players keep them sandwiched between an oscillating fan and the dehumidifier for optimal drying.

When leaving for your game or practice, always check your hockey bag to make sure you’ve packed what you need. It’s a heartbreak to arrive at the rink only to discover you’re missing a skate, shinguard, glove or—even worse—a jock or jill! (Sadly, this happens to the new hockey player and seasoned vet alike.)

Do: Keep your captain posted

If you tell your captain or team you’ll be playing, be sure to show up! No-shows can really mess things up when sorting out the lines. And always arrive on time. Putting on all that equipment can take awhile. For the new hockey player’s first time playing, it’s a good idea to arrive 30 minutes before game time, especially if you are a goalie. After your first game, you’ll find this may be very generous. I have seen some teammates arrive 40 minutes prior to the game, while others prefer to get there just 5 minutes before puck drop. With some experimentation, you will find your sweet spot.

Avoid using alcohol before the game, as it leads to poor judgment on the ice (this one’s a no-brainer).

Do: Be sure to get a warm up and some stretches in before the game

This will help to improve your performance while minimizing the risk of injury.

Don’t: Step onto the ice without knowing the rules

As a new hockey player, it’s important to be aware of the rules of the game (and of your particular league). Don’t head out there without first learning the rules.

If you’re just starting out, listen to your more experienced teammates. This helps to avoid any embarrassing situations during game play.

Don’t: Beat yourself up

If you happen to make a mistake or two in the game, try not to let the comments from your teammates get in your head. A lot of things are said in the heat of the moment and should not be taken to heart. (The exception to that is constant or negative criticism.)

Do: Be sure to stay in your lane

If you’re on the right wing, stay on the right side of the ice. The same applies to the left wingers. Centers must be in a position to travel the full length of the ice to set up plays, look for a pass, or help the defense.

If the puck is not in the offensive zone, do not cross the blueline! That draws a whistle for an offside from the ref, and kills the momentum on a scoring rush.

Do: Keep your head up

The puck is not a grenade; avoid needlessly making empty passes. Look who you’re passing to and make it productive.

Don’t: Leave rebounds in the slot

If the goalie makes a save on the shot on net you took, don’t curl away. Stay with it. A rebound often turns into a scoring opportunity!

Do: Talk on the ice

Communication is key. While on the ice, always listen for a teammate calling for a pass. The same applies to you: if you want the puck, call for it. And follow the play, not the puck.

Don’t: Stay out there forever

Avoid taking long shifts. If you watch the pros, you know they’re on the ice usually no more than 45 seconds to a minute. Hockey places great demands on the body, and once fatigue sets in your productivity rapidly diminishes. Make it a point to come off the ice when your line changes. (Note: never do a line change while your opponent is in your defending zone!)

If you’re a forward and there’s a turnover in the offensive zone, be sure to scramble back and help the defense!

Stay out of the box! Taking dumb penalties puts your team at a disadvantage that could cost the game. Don’t be that guy!

One More Don’t: Pass/clear the puck up the middle in your own zone

Sometimes referred to as the “golden rule” of hockey: never throw the puck up the middle of your own zone. If anything goes wrong, this ends up being a great scoring opportunity for the other team. And not to mention, most of the time it will leave you hanging your head in shame as the other team celebrates an easy goal.

Finally, recreational hockey is meant to be fun. It’s also a great way to make lifelong friends while keeping in shape. So don’t take it too seriously. You’ll soon discover that making the decision to play hockey may be the best decision you’ve ever made. 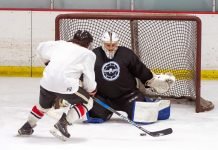