The hockey mindset of a goalie is very different from a skater’s, both on and off the ice.

The hockey mindset, or mental side of hockey, is one that does not get mentioned much by the media, but players are certainly becoming more candid about it. Being a professional athlete is often glamorized and any criticism of them is justified due to their multimillion-dollar paychecks. But hockey is becoming an increasingly open space for players to talk about the toll the game takes on their minds and not just their bodies.

The Mindset of the Hockey Goalie

The hockey mindset of a goalie is so much different from players both on and off the ice. It is akin to other “island” positions, like being a baseball pitcher or football quarterback: The outcome of the game is nearly always a direct reflection of their in-game performance. When you think about it that way, it should not be surprising that goalies put so much pressure on themselves before every game.

Have you ever seen a goalie in pregame warmups? A lot of them have quirky little superstitions that they need to do before every game. Marc-Andre Fleury and Patrick Roy are both known for actively talking to their goalposts before and during the game. If you think about it, being a goalie can be a pretty lonely and isolating position. While skaters get to converse on the bench between shifts and out on the ice, goalies more or less have to remain within their crease the entire game.

Part of the reason why having the right mindset for goalies is difficult is because there are things that happen that are out of their control. Pucks can be deflected or the goalie can be completely screened on a shot; and if it results in a goal the goalie will always shoulder the blame. It is similar to how a baseball hitter can fail 70% of the time at the plate, and still be considered a world-class hitter. It isn’t about the failures and the mistakes, it is the successful part of being a goalie that we should be focusing on.

When you are a goalie, there is nobody there to back you up if you are out of position or give up a juicy rebound. A defenseman always has their partner; a forward can always cover backchecking for a linemate; but a goalie is on their own in the crease. Any goalie can have the perfect form and positioning, and still let in goals from anywhere on the ice. That is what can be so frustrating for those striving for perfection. Hirsch has been quoted as saying that being an NHL goalie is 80% mental, and he says that the perfect balance is staying mentally alert and sharp while staying physically relaxed. If your mindset in the crease is strong, then your physical abilities will follow almost like a reflex.

Unfortunately for goalies, you are only as strong as the ability to shake off the last goal you let in. If you dwell on mistakes and allow them to remain on your mind, then it will be difficult to ever regain your composure. Goalies need to learn to deal with disappointment and imperfection: you can’t reasonably expect to post a shutout in every game you play in. Even the best pitchers allow homeruns, the best quarterbacks throw interceptions, and the best goalies let in goals. It is the nature of sport, and the true measure of mental toughness is being able to overcome these disappointments and focus on the things that you can control.

Skaters have it easy! Well, that’s not exactly true, but there is definitely less individual pressure on skaters than on goalies. As a skater, you can make a mistake on the ice and it does not necessarily mean that the game is lost. When you are a goalie, every shot against you and every goal you let in has the potential to lose the game. It is a strikingly different mindset for skaters than for goalies.

But it’s not that skaters do not put pressure on themselves. Have you ever heard of the phrase, “they’re squeezing their stick?” That refers to players that are in a scoring slump and are squeezing their stick harder in order to try and score a goal. Prolonged slumps can be detrimental to a player’s confidence, especially when you consider just how difficult it can be to score a goal in a game.

NHL players have been known to head out to the ice before warmups to visualize what is going to happen later in the game. It’s not so much imagining yourself scoring goals, but it provides a mental reassurance when the game actually starts. Imagining yourself making positive plays can help bolster your confidence, and can eliminate mental blocks when you are actually on the ice.

One thing that can really help you as a hockey player regain confidence is to learn from your mistakes on the ice. Just as goalies need to deal with letting in goals, defenders need to learn how to forget giveaways and forwards need to get past missing a golden opportunity to score. Do you think basketball players think about every shot they have missed? You are never going to be perfect on the ice, so don’t let any mistakes you have made affect your ability to learn from them to improve your game in the future.

When hockey players—both skaters and goalies—have a positive hockey mindset, it helps their teammates out too. If you are showing negative body language on the ice and on the bench, it weighs on your linemates as well. Mastering the skill of having a positive mindset will not only help you to overcome mistakes, but it will allow you to re-focus on the things you are doing right on the ice.

Tim Turk is a frequent contributor to CrossIceHockey.com. He has been an NHL Shooting and Scoring coach for over 25 years, working with organizations like the Montreal Canadiens, Tampa Bay Lightning, Carolina Hurricanes, and Arizona Coyotes, and many National Programs abroad. He also works with minor hockey teams, coaches and players of all ages and levels, specializing in Hockey Shooting, Passing and Puck Protection. For more information visit timturkhockey.com. Train with an NHL Shooting and Scoring Coach. 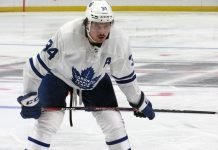 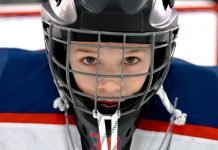