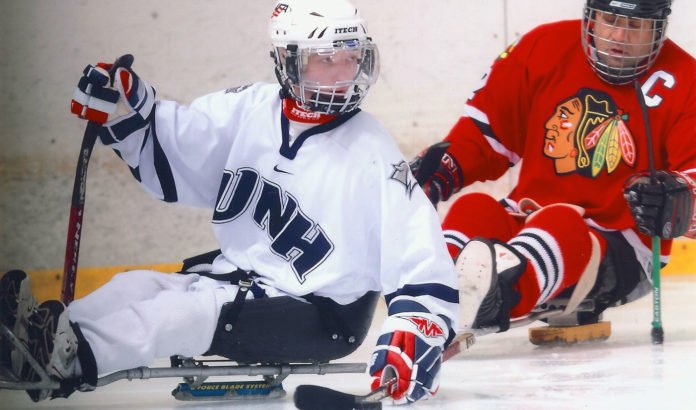 Sled hockey makes its appearance in the 2022 Winter Paralympics, which begin on March 4 and will be shown on NBC, Peacock, USA Network, Olympic Channel, NBCOlympics.com and the NBC Sports app.

Sled hockey had its beginning in the early 1960s, when some enterprising athletes at a physical rehabilitation center in Sweden wanted to play the game. A metal-frame sled was modified with two regular-sized ice hockey skate blades that allowed the puck to pass underneath. Their hockey sticks were round poles with bike handles.

The growth of the sport was slow to develop but by 1969, Stockholm had a five-team league that included both disabled and able-bodied players. Sled hockey was first demonstrated at the Paralympic Winter Games in Sweden in 1976, and then again at the 1988 Innsbruck Paralympics. It became an official event at the 1994 Lillehammer Paralympics.

“There have been such huge advances in player skill and advances in equipment that the game of sled hockey from the 1990s and the game today are totally unrecognizable,” said Tom Carr, CTRS/L, assistant director of outreach and athletics at Northeast Passage, an organization that empowers persons with disabilities.

What is Sled Hockey?

Sled hockey (sledge hockey in Canada and Europe) is a sit-down version of ice hockey for players whose disability prevents them from playing stand-up hockey.

How is it Played?

There is little difference between sled hockey and stand-up hockey; the goal is still to put the puck in the net. Sled hockey players however use their arms to propel themselves around the ice and their hips to move side to side. There are six players for each team—three forwards, two defensemen, and a goalie. Substitutes may be made when play is stopped, or on the fly. Previously, periods were 15 minutes in length but now have increased to 20 minutes, as with stand-up hockey. Play is on a regulation-size ice rink, with standard-size nets and puck. Checking and high-speed slapshots are common features of the sport. Two able-bodied referees call the game. Players and spectators alike experience the same thrills as stand-up hockey.

Sled hockey is played by a wide range of players with a variety of mobility limitations: amputees, persons with spinal-cord injuries or spina bifida, or anyone who has a permanent disability that limits participation in stand-up hockey. In addition, with the exception of the highest level of competition, non-disabled players are encouraged to participate.

“To play sled hockey, the only requirement is that you have a disability that prohibits you from playing stand-up. That makes it very broad,” said Carr. Northeast Passage, DSUSA’s Chapter in New Hampshire, has a thriving sled hockey program that attracts as many as 200 participants throughout the winter season. “As a team sport, it’s one of the fastest growing,” Carr added.

Part of its appeal is that there is little difference between sled hockey and stand up hockey in how the game is played. “It’s fast-paced and a full-contact sport. The main difference is it’s played on a sled,” he said.

Sled hockey is a great form of exercise and fitness. It increases strength and coordination, and also conditions the upper body. The balance required to propel, play the puck, and turn and stop gives the arms, back and abdominal muscles quite a workout. Those who play regularly quickly notice an increase in overall strength and balance, both on and off the ice.

What Type of Equipment is Needed?

Sleds are usually constructed of light-gauge aluminum, consisting of a customized bucket in which to sit. A backrest can be used, depending on the ability of the athlete. A frame supports the bucket, legs and feet, and is mounted on two skate blades attached under the bucket. Straps keep the player secure in the sled.

Athletes with double-lower-limb loss tend to have an advantage here, since they can use shorter sleds with no leg supports, resulting in a smaller turn radius. Instead of one hockey stick players use two—for propulsion, passing and shooting. The sticks may be up to 100 centimeters long (roughly 3 feet) but are usually between 75 to 95 cm (about 29 to 37 inches), and can be made of wood, aluminum, or composite materials. The sticks have metal picks on one end for players to propel themselves. Those with limited grip can have sticks secured to their hands, allowing them to participate as well.

Players are outfitted with a hockey helmet with face mask, and body protection including shoulder pads, shin guards, elbow pads, neck guard, and hockey gloves. Goalies wear basically the same equipment but do make modifications to the gloves; metal picks are attached to the backside allowing the goalie to maneuver.

USA Disabled Hockey has developed a program called “One Kid… One Sled… One Shot… A Hockey Player for Life!” It is designed to help attract new players to the sport of sled hockey by initiating a loaner-sled program, for rinks and organizations that want to conduct learn-to-play clinics but are prevented from doing so due to the lack of sleds and sticks needed for such introductory clinics. Sleds and sticks are shipped directly to the rink conducting the clinic three days prior. Participants are then required to ship the sleds back within three days after the conclusion of the clinic. All shipping charges will be paid by USA Hockey. Applications can be found on the USA Hockey website,
http://www.usahockey.com/sledlendingprogram.

USA Hockey is the national governing body for sled hockey in the United States.

The Popularity of Sled Hockey is on the Rise

Many DSUSA chapters offer sled hockey opportunities, as do other independent clubs across the country. The sport received a huge boost when USA Hockey took over as the national governing body for sled hockey and sled hockey programs. For the past 10 years, USA Hockey-sponsored sled hockey programs have sprung up across the U.S., with the national team selected by the organization. Also fueling interest in the sport is the National Hockey League, which hosted the first USA Hockey Sled Classic in Littleton, Colo., and Denver this past October. Four teams, made up of 46 players—many on current and recent U.S. national team rosters—played under their NHL affiliate’s jersey: the Colorado Avalanche, Chicago Blackhawks, Philadelphia Flyers, and Pittsburgh Penguins. Organizers hope to ultimately have all 32 NHL teams represented in future Sled Classics. And let’s not forget the U.S. Sled Hockey team, which won gold in the 2010 Paralympic Winter Games in Vancouver. Amputee goalie Steve Cash, who didn’t allow a single goal in five games, won an ESPN ESPY award for Best Male Athlete with a Disability.

Northeast Passage is in partnership with the University of New Hampshire to offer winter sport athletes an opportunity to become student athletes. “UNH recruits, trains and offers scholarship opportunities to disabled student athletes,” Carr said. “These athletes train every day and have access to the same facilities and coaching as their non-disabled NCAA counterparts. This, combined with Northeast Passage’s Paralympic Sport Club status, allows these same athletes the opportunity to work with and mentor the next generation of sled hockey players.”

One of Northeast Passage/UNH’s student athletes is Taylor Chace, from Hampton Falls, N.H., a member of the Vancouver gold-medal-winning sled hockey team. Chace also was a member of the 2006 Paralympic team that won bronze in Torino, and is the current captain of the U.S. National Team.

The Northeast Passage sled hockey team competes in a competitive adult league (the Northeast Sled Hockey League). The league is made up of teams of men and women who participate in league play and travel nationally and internationally for tournaments. Northeast Passage’s team practice sessions are intense, and sometimes take place multiple times weekly. “They also need a commitment to off-ice fitness,” added Carr.

(In addition to sled hockey, UNH offers opportunities in alpine skiing, Nordic skiing, biathlon, and cycling. Recruits must demonstrate the academic ability to attain admission to the University of New Hampshire and be currently competing at a national or international level, OR be at the top tier of regional competition with the potential and desire to advance. Competitive scholarships are available. Ensuring one has the right skis, and helmets for these sports are very important safety measures.)

Published with permission of Disabled Sports USA. From an article originally appearing in the Fall/Winter 2014 Challenge Magazine. 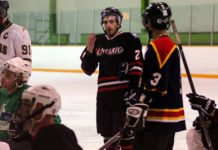 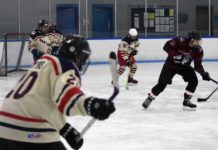 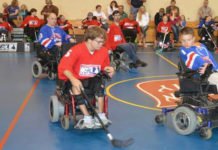