Shooting in stride can be an effective way of
scoring goals

Do you want to score more goals? Well then it’s time to learn how to shoot in stride! To do so, I’ve outlined a progression for getting comfortable shooting the puck in stride, off of either foot. There are a number of ways to learn this technique but this method is proven and reliable. Practice the progression you see here and let us know what you think in the comments section below!

The Keys to Shooting in Stride

Step 1 Practice passing while moving your feet (both linear forward strides and crossover strides). If you can’t pass with your feet moving, you won’t be able to shoot!

Step 2 Next, move to actually shooting the puck without stopping your feet. Although you may not be producing quality shots at the start, you will become more comfortable releasing the puck with your feet moving.

Step 3 Standing stationary, now isolate releasing the shot while landing on either foot. This will allow you to get comfortable releasing off the landing motion (of either foot), and also practice the use of downward force to improve shot release and speed. After doing this stationary, begin to add a few strides in.

Step 4 At full speed, concentrate on releasing the shot off of the inside leg. Practice this both with forward striding and crossover strides. 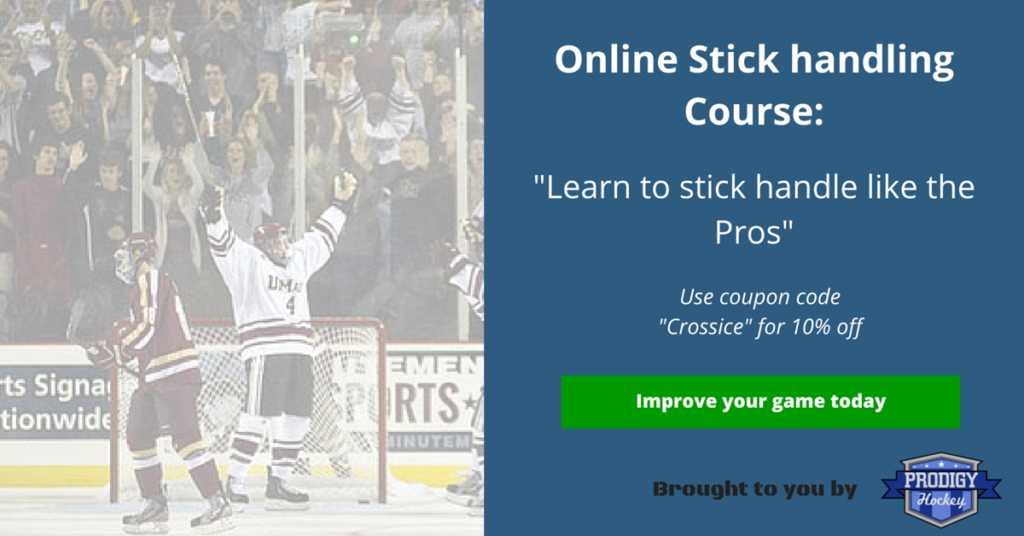 Step 5 At full speed, work on releasing the shot off of the outside leg. Practice this both with forward striding and crossover strides.

Step 6 Now try receiving the puck and shooting while maintaining your skating motion. Focus on shifting your weight upon receipt of the puck and releasing the shot in one fluid motion. Get comfortable shooting off either foot, depending on which side the pass comes from.

Step 7 Add pressure from a defender to cut down the time and space available to you as the shooter.

Step 8 Finally, apply the learned skill (shooting in stride) to a game situation drill, or in an actual game!

Watch this video for a breakdown of Shooting in Stride Progression: