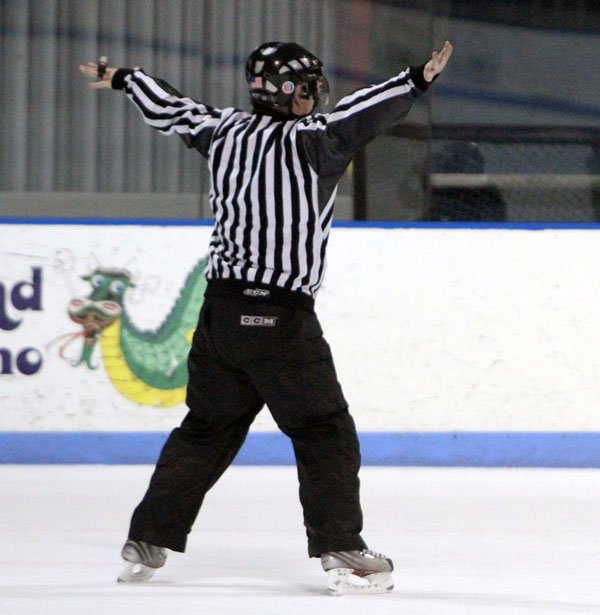 With rec hockey refereeing, every ref will miss calls. Regardless, they all want to
do as best they can.

Arm straight up… whistle poised… possession and control… blow. It’s instinctive. I can’t watch a game on TV without thinking—and not just to myself—that it’s a trip. But after more than 10 years, I can’t help it; rec hockey refereeing is ingrained in me. Hockey comes with skates and sticks and pucks.  And refs. That’s my team: the guys (and we are predominantly guys) in stripes.

The things rec hockey players say make me laugh. “You called that one on me because you don’t like me.” Truth is, I don’t even know you. I’m sure you’re a great guy off the ice but that doesn’t give you permission to trip or slash someone. Calls are so instinctive. I’m not thinking who did it; it’s what happened, the situation. Sure there are incidents that could go two ways in adult recreational hockey, especially at the beginner level. Did he intend to hit him or was he just unable to stop? And guys develop a reputation over the course of a game or a season. But I don’t like you? Let’s have a few beers after the game and I’ll tell you if I like you or not. Whether I do or I don’t isn’t going to change anything when we’re out there on the ice. But thanks for the beer.

“Hey, Stripes. Your partner’s missing a good game!” In other words, he just missed a penalty on the other team of the same nature I just called on you. Look, we’re not perfect; in rec hockey refereeing everyone misses stuff. If you have a problem with my (or his) calls game after game, let the head ref know.  But the fact is a bad call or a bad game happens to everyone. Criticizing my teammate in the heat of the game isn’t going to get you anywhere with me. What I do think is fair is your asking me to watch a certain situation or player: He’s holding in the corners, or he’s cross-checking in the crease.

As I said, I miss stuff. Respectfully directing my focus is just asking me to do my job, something I want to do as well as I can. Likewise, feel free to ask me about a rule or a situation. When time allows, I am happy to explain that I waived off icing because the defenseman could have played the puck or you were offside because, even though you hustled your butt off, when you dove head-first for the blue line your skates were still in the attacking zone. Feel free to ask—just not while I’m trying to stay ahead of the play.

“He hit my goalie!” Perhaps in the bible it is written an eye for an eye, but in the USA Hockey rule book it says a slash is a two-minute (or more) penalty. And do you know how much padding that goalie has on?  Let it go. Nine times out of ten I got the first one. Take advantage of the power play and the open ice. In rec hockey—and that includes rec hockey refereeing—we’re all here to have fun. If we’re fortunate we have to be at work the next day. Pass, shoot, score—that’s fun. And after all, isn’t that what we’re here for?

Drew Marks is a labor and employment litigator in NYC. He has been a recreational hockey referee for over 18 years and still enjoys playing the game.