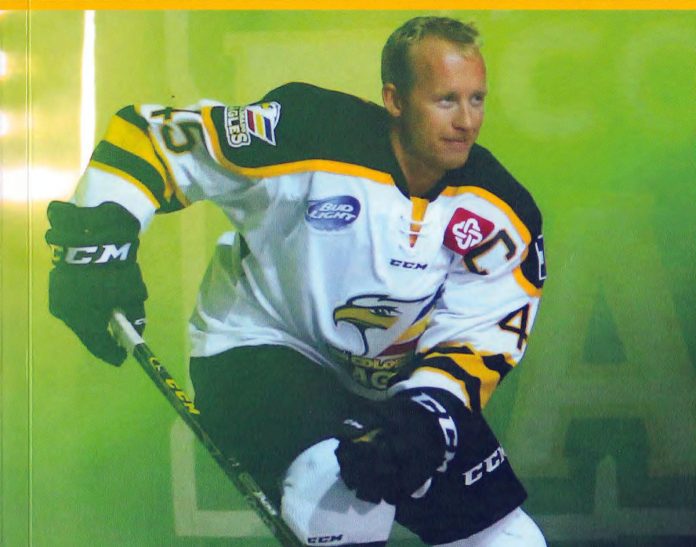 The true story of a small-town hockey hero’s quest to play in the pros. A book excerpt.

Trent had been recognized as an above-average hockey talent since he was about 12 years old, from peewees, bantams, on up through high school. But he hadn’t been led down the traditional path that most pros follow, like AAA hockey, youth training camps, summer workouts, and all that.

His family was a hockey family, but his parents didn’t have time to help Trent develop his talent. He had 11 brothers and sisters. Trent was the second oldest, and his parents had more important things to do than run one kid around to hockey events all the time. But still, his talents as a hockey player had shown through whatever lack of opportunity he may have experienced. By the time I saw Trent play in the men’s leagues, I knew right away that he had natural gifts on the ice.

Trent grew up near me in Howell, a town in southeast Michigan. He was a good kid, always looking out for his brothers and sisters. With shaggy blond hair and blue eyes, he was never the biggest kid out there on the ice, but he was quick, had a good center of gravity, and could navigate the rink like he had eyes in the back of his head.

Howell, like many small towns in Michigan, is a hockey town, and Trent’s dad was a hockey dad. Trent began playing hockey when he was only four years old, and that’s when his dad built him and his siblings a rink in their backyard.

When the moment finally came and I got Detroit Red Wings general manager Kenny Holland on the phone, Trent was playing in the men’s leagues while attending Michigan Tech earning an engineering degree. I had previously called Jamie Russell, the Michigan Tech hockey coach at the time, and told him his team needed to take Trent and “red shirt” him [when a student-athlete does not compete at all against outside competition]. They told Trent to try out for the team but cut him nearly immediately, likely only because of his size. I’m sure Russell regrets cutting Trent now.

Trent had been playing organized hockey for about 10 years, from the peewees up to the men’s leagues. I remember the first time I saw him play, and I said to myself, well gosh darn it if this kid doesn’t remind me of Pavel Datsyuk of the Detroit Red Wings. Compared to the rest of the guys out there on the ice, and there were good players in those summer leagues—college players, even NHL players—Trent was obviously one of the best players by far.

So I got to thinking about what a shame it was that Trent was talented enough to be playing for the Detroit Red Wings, but nobody else was giving him credit for those talents. At that time I already had an established insurance agency. When I started in the insurance business I used to cold-call four to six hours a day. I thought I could transfer those phone skills into getting some pro tryouts lined up for Trent.

When Trent was finishing up his bachelor’s degree at Michigan Tech in the spring of 2008, I called him up one day out of the blue and said, “Trent, I know you’re a great hockey player—you’re good enough to go pro—and I was just wondering if you had any interest in pursuing that path?”

Trent laughed and said, “Well, yeah, I mean, I would love to try it, but how the heck you gonna do that, Jay?”

“But would you do anything to get a chance to play professional hockey?”

“Well, yeah, anything. It’s going to take a lot of work, that’s for sure, and I want to make sure you’re 100 percent committed to this. Otherwise, you know, I don’t want to waste my time, or your time for that matter.”

“Jay, I would do anything for a chance to play pro hockey.”

“Listen, Trent, from here on out, I want you to remember one thing. I know you’re good enough to play in the NHL, so I am going to do my darnedest to make sure you get a shot doing just that. Now, I know it may seem like a long shot, but the NHL is our end goal and I’m not going to quit until you get a shot to play at that level. How does that sound?”

‘‘To be honest, the NHL sounds kinda nuts. I mean, I didn’t even make the Tech team, Jay. You really think the NHL is our best bet?”

“Believe me, Trent, you belong in the NHL. And I’m not going to stop trying until you get your shot. Let me handle the business end of things; you just be sure to be ready to play when you get the call. Okay?”

“All right. If I get the call to play pro hockey, you can be sure I’ll be ready to give it a shot.”

“That’s what I wanted to hear. I’m going to get started, then. Hold tight, I’ll be in touch.”

From the book “Chasing the NHL: From Pond Hockey to Pro—The Trent Daavettila Story,” by Jay Storm. © 2018 Jay Storm. Excerpt published with permission.

Read the full story by ordering your copy of the Trent Daavettila story today.