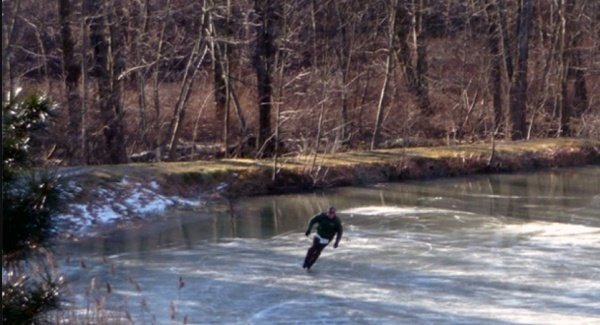 There is nothing like a game of pond hockey when the conditions are right. But it takes work.

There is no better feeling than having a bunch of friends over to play some pond hockey  when the conditions are good. But it takes a lot of work to get the conditions right.

For each hour of skating on my pond, it takes three hours of preparation. That is an average. When it is black ice that has formed it is less, and when there has been any kind of snow, it is much more.

Here in the Northeast, pond hockey season starts in mid-December when I start tracking the average daily temperature, hoping for a couple of weeks of cold and cloudy (but not snowy) weather. In a good year, we will get six weeks of usable ice. Most years it is just a month; a couple of years ago we got one morning—and even then only small kids could skate.

Once I get at least a good week of uninterrupted cold weather, I will check the thickness of the ice. Two inches is usually enough to get started. It’s not enough for a big group but it allows the kids to skate and it is enough for me to start the ice preparation that will hopefully last throughout the pond hockey season.

I’ve got an “ice mower” that grinds out any bumps, and that is usually the first thing I do unless there is a nice sheet of black ice. The ice mower looks like a regular push lawn mower, but it has been modified to grind out any bumps you get from snow or rain while the ice is setting. This is my most important piece of equipment and I would recommend that anyone with a patch of ice for pond hockey get ahold of one.

Once the ice has been ground down flat, I will lay down a layer of hot water, using what looks like a giant squeegee. I generally don’t resurface the ice that often because a well-scraped sheet will usually resurface itself by having the sun warm it up during day. It is not perfect but it’s better than moving around 100-plus feet of hose in frigid weather.

Once the sheet is in good condition, I will put up the end boards, which are freestanding but can handle a slapshot. Finally, when we’re ready to play some pond hockey I bring out the side boards, which are a full set of those dividers you see at the rink where mites play. They are easy to get on and off the ice and work perfectly as side boards.

Finally, if we are playing at night, I switch on the giant lights I installed in the trees. The lights, of course, extend the playing time and allow for maintenance after work.

What I have described here is the perfect scenario. It is rarely that easy. The biggest problem any pond hockey fan faces is snow. Snow is evil. Lots of snow is especially evil. I have learned a lot about snow since I bought my pond (some would say I bought my house, but I really just bought the pond).

Most importantly, snow, if placed into a large pile, creates heat and it will melt and destroy all the hard work you put into the pond. You have to get every snowflake off the pond as soon as possible. I first started using a shovel, then bought a snow blower and now use an ATV fitted with a plow. You also have to shovel after every hour of skating. The amount of snow a group of skaters can make on soft pond ice is staggering. That snow also has to be thrown off of the pond. You will develop a strong back after a good pond hockey season.

Maintaining a hockey pond requires a lot of effort, but it’s a worthwhile effort. There is no better way to start the day than to have the pond to yourself for a half hour of skating, shooting, and stickhandling before heading off to work. It really is the only time I get to work on my game, and I developed my slapshot during those morning skates. While I let my kids schedule the day on weekends, I get the pond at night and will set up 3-on-3 games with friends.
There is nothing better than skating hard and then sitting on the bench, taking a break with a beer while a light snow swirls around the lights.

Geoffrey Horn is a litigation attorney. When he’s not litigating, he keeps himself occupied by playing on four-and-a-half different teams. 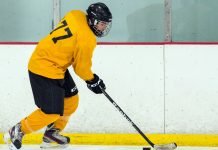 Left or Right: Should You Play the Off Wing?