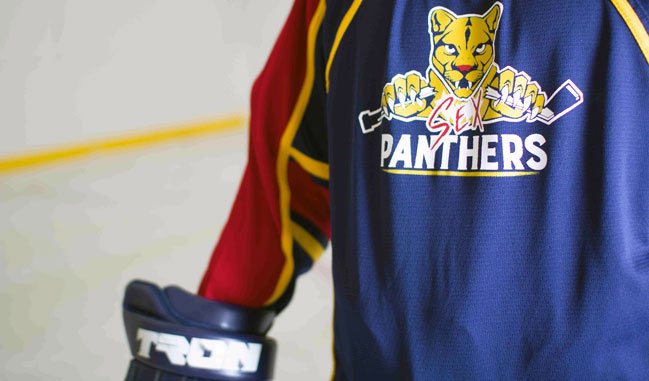 Beer league hockey is an entirely different beast than minor hockey (in more ways than one!). As a screen printer whose job it is to create jerseys for recreational hockey teams, I’ve come to realize one of the biggest differences is the opportunity to make your own custom jerseys with some sort of inappropriate pun for a team name. Some of the names we’ve seen range from the benign Snipers, Fireants, and Piso Mojado, to more colorful monikers such as Fussy Puckers, Short Bus, Victorius Secret, Don Cherry Poppers, Easton Fections, Sticks & Schmucks, and Cleveland Steamers. If anyone can think of it, you’ll see it on a team jersey.

There’s another aspect to the business of ordering team jerseys I discovered. Virtually every time I play in a rec league, there’s at least one team whose jerseys arrive after the third week of the season. For a while I always just thought the screen printers were jammed up that time of year. However, once I ventured into the selling side of things I began to notice the delay is caused by buyers not being given all the information the screener needs to get started. It’s important to keep in mind that jerseys can take anywhere from one to four weeks to screen, depending on who you’re using as a screener, how busy they are, and the location the jerseys are getting shipped to. Usually there are two to eight weeks of work for the team captain to do, prior to getting this process underway (which of course depends on how well you’ve trained your teammates).

Next time you’re ordering your team jerseys, to avoid being labeled “that team”  keep the following in mind:

Know What You Want

Jerseys can range in price from under $20 to over $200, depending on the model you choose and features you add (names, numbers, socks, etc.). Unless you’re funding it yourself and have veto power, it’s going to take some time for you to reach agreement on budget and colors among 15 or so guys (and/or girls). Decide on a Finalized Logo

This may seem obvious, but printers can’t start printing until they know what’s going to be on the jersey. Sadly, we’ve had teams ask us to rush their jerseys only to take two weeks to get us a logo! Similarly, be sure to budget the appropriate amount of time to choose your team name, and draft a few versions of the logo while continuously getting consensus in the locker room.

Nail Down Those Details

You’re the boss. Make sure we know which features go with each jersey: size, name, and number, as well as who gets the C and the A.

Lastly, since jerseys are custom made and cannot be resold if you bail, no one is going to start printing without some cash up front. If you’re already organizing your team, you pretty much are aware that there’s always at least one slowpoke when it comes to paying. Make sure you get on them early and often to keep the team from getting mad at YOU for jerseys that arrive late.

You knew that being captain was this much work when you volunteered for the job, right? Keep the team happy by helping your screener help you get your jerseys on time.

Got a crazy and unique team name? Share it with us in the comments section below!

What Kind of Defenseman are You?

Confessions of a Hockey Parent (A Book Excerpt)