An excerpt from the book A Fly on the Wall in the NHL—inside stories of the National Hockey League’s glory years. This time, we take an in-depth look at legendary coach “Iron Mike” Keenan. Second in a series.

Inside the NHL: Mike Keenan explores Mike Keenan’s impact on the New York Rangers, culminating in their Stanley Cup win in 1994.

In order to understand Mike Keenan’s thought process, you need only review what was said about his mentor and idol, Scotty Bowman. Steve Shutt, one of Bowman’s former players, once said this of Scotty: “You hated him 364 days a year and on the 365th day you collected your Stanley Cup ring.”

Scotty Bowman gave Mike his first entry into the professional level of hockey, installing him as head coach of the Buffalo Sabres’ minor league team, the Rochester Americans. Keenan was assigned that position by Bowman while he was head coach of the Sabres.

I visited Keenan’s office at the time, as I was the professional Skate Fitter for the Bauer Skate Company. We had several conversations about how he interacted with Bowman. Keenan was asked to be at the phone in his office at a specific time to take Bowman’s calls. He would explain to Bowman how the players were developing, and make recommendations. He said that Bowman would listen politely and then send down or bring up the players Bowman wanted to, not the players that Keenan would suggest.

Daily Deals are hand-selected offers available in limited quantities, for a limited time at an extreme discount at HockeyMonkey.com. Shop Now!

Inside the NHL: Mike Keenan—Student of the Game

The point of this is that Keenan is a very smart student of the game. He came to understand the psychological impact of what is said and done, and how players react, through the Scotty Bowman lens. He saw Bowman send Yvon Lambert down to Rochester without any concern about how angry Lambert would be as a result.

Lambert was one of the players from the Montreal Canadiens’ championship teams, who were brought to Buffalo in a trade. Lambert assumed he would be helping the Sabres, but was instead sent to their minor league team. Keenan was able to channel and tame a great—but extremely angry—player; Lambert was a major distraction in the locker room for the team. He was throwing equipment around and telling the young players in Rochester it was a terrible organization. Keenan was able to turn that around, convincing Lambert to help the younger players develop; it was Lambert who then helped lead the team to the Calder Cup championship that same year. Keenan’s favorite quotes help explain his thinking. “Better to understand than be understood” and “Show your players that you care, not what you know.”

A Fly on the Wall in the NHL

After seeing Rochester through the Calder Cup championship, Keenan was offered the head coach position in Philadelphia, bringing with him the lessons he learned from Bowman. He led the Flyers to the Stanley Cup playoffs twice. In the process however he managed to anger enough players on the team over time, that the franchise owners lost confidence in his ability to lead the team.

Inside the NHL: Mike Keenan—Making History in the City That Never Sleeps

Fast forward to 1993, when Mike Keenan was hired by the New York Rangers. Iron Mike was appointed head coach after the Rangers had performed poorly in the playoffs the year before. It was suggested the team needed some “discipline.” It is important to realize that Keenan was driven by the desire to win, and any emotional cost to either players or management was never a consideration.

Both factions were not at all ready for the type of discipline Mike was about to exact on the Rangers players and general manager. Before too long they all began to realize it was his way, and his way only. If the highest-scoring player from last year’s team did not show respect, he was sat out and then traded. That happened and any resistance from the GM was not a concern of the coach. In fact, the lack of communication became so apparent toward the end of the season they no longer spoke.

For the players that did buy into Keenan’s game plan, he relied on them to take the team to win the cup, no matter what it took. Mike’s number one on-ice leader was Mark Messier. The amount of ice time and effort in terms of sacrifice to win, has never been more pronounced than with Messier’s leadership. In 1994, Messier and his team hoisted the Stanley Cup at Madison Square Garden after beating the Vancouver Canucks in seven games; a historic win that ended a 54-year Cup drought. Messier and Coach Keenan are great friends to this day.

Mike Keenan left the Rangers just 30 days after the Stanley Cup victory, over a contract dispute: he was due a bonus that was not delivered. The perception was that GM Neil Smith was in charge of seeing the payment was delivered, and he was in large part blamed for Keenan’s departure. It appears to me, in light of all that is known about his sudden departure from New York, an offer to Mike for a new and more substantial contract with an early bonus payment instead of an extended delay may have been a way of moving forward with Keenan as the Rangers coach, and preventing his abrupt departure.

At the 25th anniversary of the team’s victory in 2019, the wounds and ill feelings by the Rangers organization were healed toward Neil Smith, as both he and Mike were in attendance. Keenan had developed prostate cancer and Neil Smith’s son took his own life; life-altering events that can change any situation and make bad feelings right it seems. The celebration of the win was relived, twenty-five years later, in the city that never sleeps.

These days, Mike Keenan has a podcast on YouTube and anyone can see how well he delivers his view of events. It seems he has some insightful understanding of the issues facing today’s game. He is open with his comments in several podcasts addressing the issues he faced as head coach with the Rangers.

Keenan is also co-authoring a tell-all book on his days as the Flyers coach. It is guaranteed to be a page turner, from a key player over the years from the mid-1980s, through his time at hockey’s highest levels around the world. The book should be a very informative and well-detailed view of many of the key players in the incidents that he experienced throughout his very colorful time coaching hockey.

Daniel C. Bryndle, developer of the Win Now Matrix, has worked extensively with the NHL and AHL. He is the author of “A Fly on the Wall in the NHL” and “The Win Now Matrix.” Inside the NHL: Mike Keenan is an excerpt from his book. For more information visit danielbryndle.com. 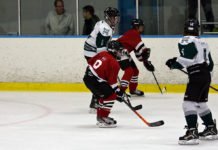 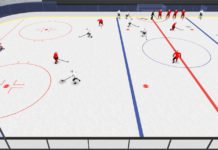 The Get Open 2-on-1 Hockey Drill