I’m the mom of a goalie, and I’ve always felt that one of the toughest positions in hockey was being a goaltender.

As the last line of defense, you cannot hide your mistakes and people always let you know that. Whether it’s the body language of your teammates, the gasps from the crowd or—worse—the wicked outbursts from passionate spectators, there is no hiding a goalie mistake.

I must tell you about a recent conversation I had that changed my view on that completely. I was doing a presentation at an event with people that work in all areas of sports. There, I met a doctor who was working with referees on a project. It involved conversations she had with game officials on why they stay in the game. I talked to her at length about how difficult it must be for them, especially hockey officials. I told her about some of my own moments of passionate outbursts toward referees that I wasn’t very proud of. (As a goalie mom, my famous line, as the traffic would pile up in front of the net, was always, “BLOW THE WHISTLE!”)

The doctor told me the story about a man who was watching his young son during a game. It was a playoff game so emotions were high. His son was a star (at the ripe old age of 8) and this man felt very confident to yell, pace, and say whatever he wanted to the hockey officials.

He belted out many comments during the game, but they seemed to get worse as the game got closer in the third period. He was screaming at a young referee after every call, asking him if he needed glasses; did he need to see the rule book; and then he blurted out one of the most famous parent-to-referee expressions: “Are you blind?”

As he was yelling, a woman came and stood next to him. After a few minutes, she started to make comments about his son so the father could hear her. She was making fun of the way he was playing; she even commented that it looked like he needed glasses to hit the net.

It didn’t take long for this man to realize that she was making fun of his star player. He turned to her in anger and said, “What is wrong with you? Why are you making fun of my son?” He went on to say, “What number is your son? I’d be happy to start yelling at him since you are having so much fun commenting about mine.”

She paused for a moment and then said, “You have been yelling at my son!” He said, “What number is he? I haven’t been yelling at anyone’s kid.” She turned to him, looked him in the eye and said, “My son’s the referee. I’m also here to watch my son do what he loves.” She then turned and walked away and left the man, red in the face, to watch the rest of the game in silence.

That story comes to mind each time I watch a hockey game and people start yelling at hockey officials. I can’t help but think of how she must feel every time she picks him up after a game like that. I thought of all the times my son stood in net and had been yelled at or talked about by other adults. Trying to make him feel better after a game like that was so difficult. I tried to imagine what those moments must be like for other parents who come to pick up their son or daughter after they’ve refereed a tough game and been made fun of, yelled at, or berated by adults at the rink.

Easy on the Refs!

Why do hockey players and spectators think we can get away with this? If we aren’t careful, there will be nobody left to referee our kids’ games. If we no longer have game officials, there won’t be games to watch or play. So the next time you’re at the rink, ask yourself who’s listening as you yell at the referees: is it their wife, their husband, their child, or their parent? Who is listening to you yell at their loved one because they’ve made a call you don’t agree with, or like any other human being, they’ve made a mistake? Do you really want to be that guy in the story who was left red in the face, because you realize you’ve spent the last hour screaming at a ref, especially if he or she is a teenager?

I will admit that my view has changed on the toughest position on the ice. I’ve come to realize that being a referee requires thick skin and such passion for the game to tolerate what goes along with it.

That’s why, whether you’re a hockey player or the parent of one, please don’t ever underestimate the power of an official. Because it truly is one of the toughest positions in the game.

Hockey Talk: The Language of Hockey 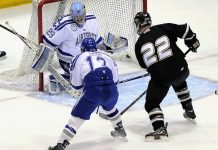 How to Boost Your Goal Scoring