You’re tearing up the middle on a breakaway. Like most rec hockey players, you take the shot and hope that if the biscuit doesn’t make it in the basket, one of your teammates will snap up the rebound and slap it home. With a defender or two often in hot pursuit, any rebound is usually swept up in a hurry. The pressure is on to score if you choose to be the guy to take it to the house.

Life can throw us some curves, and so it goes in hockey. As you cross the blueline into the zone and you don’t have the ability to make a middle pass or a clear lane to the net—or lack the offensive support—don’t panic and take the shot. Instead, try something different: Go for a drop pass; if no one’s home, it’s time to create another wave of attack. Drive wide, hit the brakes and curl back along the boards. Take a second to wait for your teammates to enter the zone. This is known as the Hockey Delay Tactic.

Pull the defenseman with you as you stop along the boards. Look to make the pass to your trailer or man on the point. Usually all it takes is a soft pass into the space that your trailing teammate can skate into. Put it into an area towards the middle of the ice, hard enough that you make it past the defenseman who’s on you, but not too hard as to do the other team a favor by clearing the zone. If you try to go tape-to-tape to your teammate with a hard pass, the odds of that pass going through and creating a chance the other way increase dramatically. Make sure you have a clear lane and your teammate is in good position to get to the pass unobstructed. Get comfortable with this tactic and your attack can come in a second wave.

See the concept in action. Jeremy breaks it down for us in his video below. 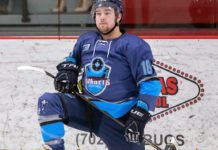 The Bad Shift: How to Bounce Back 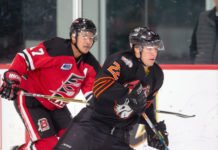