Good coaching requires knowledge of the game as well as intuition

When I first started playing rec hockey I joined a team that, on Day One, set up the power play and penalty kill lines. By the next day it was clear that only the team’s best players would get legitimate ice time. This is the way a professional team operates—it may even fly in a youth hockey, despite vehement objection from parents—but it never works in a recreational league. Everyone pays to play, and no one wants to leave his house on a brisk winter night to observe the game from the bench. After one mildly successful season, half the team left discouraged. They forgot why we were there: For the love of the game.

As both coach and captain, leadership is always a test. This phenomenon, frequently occurring in adult rec hockey leagues in the U.S. and Canada, puts experienced players in the awkward yet rewarding position of teaching teammates about this wonderful sport we’ve come to know and love. The dual role straddles the line between friend, educator and teammate; that is why I feel the ultimate job of coach for a rec league hockey team is to not just teach the fundamentals of the sport, but to also monitor the abilities of the players on the team. This is a mark of good coaching.

When your team is down a goal near the end of the game, the coach has the responsibility to win, regardless of the feelings on the bench. However, as captain, these are also your friends and line mates. It is difficult to make split decisions that affect both friendships and championships alike, a unique scenario found only in adult sports.

To Stack or Not to Stack

For this reason, I find that the most cohesive teams aren’t only those that can win, but those whose players are relatively at the same skill level. In rec hockey, a sign of good coaching is that he or she puts his best players on the ice at the end of the game and ensures that the rest of the team is not short-shifted beforehand; stacking lines solely at the end of the game results in a feeling of inclusiveness and a boost in team morale. This not only makes for more fun on the ice, it carries over into the locker room where a good sweat is rewarded with an ice-cold beer.

The Hardest Sport to Master

At my age I get exhausted just watching athletes hoist the Stanley Cup, yet that doesn’t mean that my team has lost its competitive edge. It’s always fun to win. I truly believe that at this level of play, superstars/ringers are not only unnecessary; they’re in fact counterproductive. These guys dominate the game, forcing their own teammates to be spectators on the ice. I can’t count how many teams brought in a ringer and won several unexpected games only to fall apart the following year, leaving several players frustrated over the lack of ice time and camaraderie. In rec league hockey, it’s not surprising to lose a player or two to a job promotion, move, or whatever life throws our way.

My advice to coach/captains is to not lose sight of why we step onto the ice in the first place. Will that trophy look nice on the mantle next to the TV? Probably. OK, I’m not going to lie; it’s a pretty sweet trophy. But these coaches need to find players with similar skill sets and competitiveness to keep the fun alive. After all, we’ve committed to playing the hardest sport to master, one that requires us to wear full padding while balancing on only quarter-inch pieces of steel, and not even stopping the game to change teammates.

Yes, a coach can teach you where to stand on a face off, but good coaching requires that everyone on the team knows this and feels like they’re actually contributing.

Gary Halman is co-owner of a fire door manufacturing firm. He is a certified Level 5 coach.

Do you coach hockey? Have something to say about a coach? We’d love to read about it! 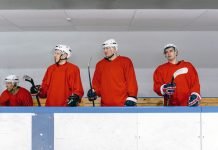