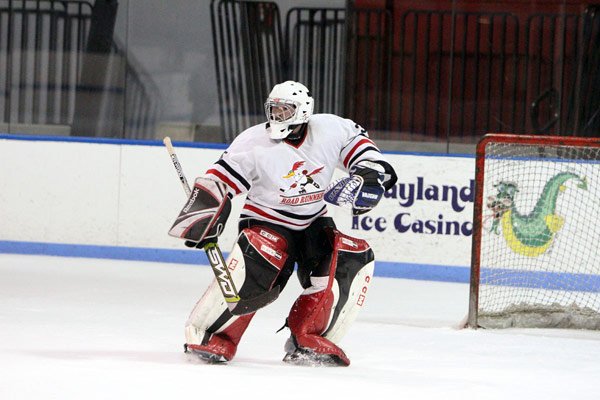 In today’s game, puck handling is an important but often overlooked skill for goaltenders. (This especially is an area of weakness for the majority of youth-level goaltenders.) They either leave too many rims or turn the puck over too much. In many cases, coaches—as well as goalies themselves—get frustrated with the turnovers so they are discouraged from handling the puck. This can lead to a lack of confidence and skill as goalie moves up to the higher levels of hockey. This article provides goalies with some simple tips to help them effectively move the puck.

Philosophy The goaltender’s job is to help start the breakout by “setting” the puck for a defenseman or by “moving” it to an open teammate. The goaltender doesn’t necessarily require a great shot to be proficient at puck handling, but it certainly does make life easier on clears and rims. For the most part, the goaltender will be making a short pass to their defenseman in the corner, or winger on the half wall.

Approach The goaltender should start just inside the top of the crease and anticipate—not cheat—as the player approaches center ice. Being too aggressive will lead to a greater distance to travel, whereas being too deep will cause the goaltender to lose speed by having to rotate too much to get behind the net. I recommend either the continuous T-Push or T-Push to C-Cut, as the best method of getting behind the net quickly to get set up for effective puck handling.

Face Up-Ice The goaltender should strive to face up-ice whenever possible. Obviously, this will make reading the forecheck much easier. If the goaltender does not have enough time to completely face up-ice, he or she should at least rotate enough to be able to see both walls. The goaltender should also look over his/her shoulder as they are going back to stop the puck, and not after they stop the puck. Most teams send two forecheckers hard, with the third forward trying to take away the strong side half wall.

Communication It is imperative for the goaltender and defensemen to have simple cues to help in the decision-making process. Every team may have their own system, but some common cues are: Play It or Rim It, Leave It, Over or Reverse, or simply calling the Goalie’s Name if they are open.

In summary, puck handling is an important skill for goalies to possess. He or she can start the breakout and cut down on defensive-zone time for their team, and can also help prevent their defensemen from receiving unnecessary bodychecks. As a goaltender, the keys are to have good communication with your teammates, read the forecheck, and execute the safest play.