Chris Dyson’s path has been anything but ordinary.  Had he viewed the world from a “normal” perspective, he certainly would have taken a different path.  Born with a congenital heart defect, at the tender young age of 7 he literally died many times over, and came back to life.

Dyson’s condition was so remarkable, in fact, that he was written up in the medical journals of the world-renowned Hospital for Sick Children, in Toronto, Canada, for having over 100 cardiac arrests in one afternoon. This led to doctors having to permanently implant a pacemaker to keep him alive. In the 10 years that followed, he endured several more incidents where pacemakers had malfunctioned, been recalled, or quit, resulting in still more cardiac arrests.

Despite those daunting circumstances, Dyson had a desire to play hockey—and he wanted to be a goalie. And although the time spent in and out of hospitals kept him from learning to skate as well as the other kids, he persevered.

As any medical practitioner will tell you, even one cardiac arrest can cause brain damage; having several in one day is pretty likely to leave you with some permanent deterioration. Amazingly, his doctors had determined there were absolutely no ill effects or damage. (We all hear that goalies are a little “off,” and there could be the argument that maybe this is why Dyson was set on being a goaltender, despite the odds.) He has been a goalie since the age of 12, when, for his first league game in public school, his teammates had to actually push him out to the net because he could barely skate.

Dyson has played literally thousands of hours between the posts—mostly in adult competitive and rec leagues—beginning at age 14, while most of his buddies were playing minor hockey, which would come two years after he started playing in the men’s leagues. He quickly learned that players can be unforgiving, and so he needed to figure out how to improve. He would regularly attend open-ice sessions for adults, often skipping school to gain experience and make up for lost time. Those shinny games usually included many current and aspiring pro players, which made for an interesting introduction to the game for a 14-year-old newbie goalie. He studied the goaltenders and learned their movements, while observing the players to figure out how goals were scored.

Dyson began running men’s leagues and teams at just 16 years of age. He has been a professional goaltender coach since 1988, operating goalie schools in three countries and coaching students from another 15. He soon established a wildly successful goalie-rental business, providing upwards of 1,000 hours of coverage per season. Then he created Puckstoppers Goaltending Services, now one of the world’s longest-running goalie schools.

As a Puckstoppers rental goalie for over 20 years, Dyson would often play 6 to 10 times a week at all levels of adult rec hockey. He once played 7 hours in one day, at 6 different rinks, in 3 towns.

Dyson’s love of hockey never wavered. He was constantly communicating with professional goaltenders, working within the game, studying the game, learning his craft and gaining an understanding of how to be a better goaltender and teacher. He quickly understood that the learning process would never stop, and that he needed to better himself.

His next step was to move on to attain coaching certifications and accreditation. With his three children playing hockey and many years under his belt as a goaltending coach, Dyson was often asked to coach teams. At first reluctant, he finally gave in: The result was the winning of several minor hockey championships, as well as working his way into the ranks of junior hockey as an assistant and goalie coach—all while finding time himself to play several times a week.

Along the way, Dyson founded the Just For Fun Hockey League (JFFHL.com), which features divisions for both children and adults. The league promotes an environment where adults can safely play and enjoy the game along with some good camaraderie, without the fear of getting “gooned,” especially for someone who came back to life as he did. The rules and design of the JFFHL league has allowed it to flourish without the aggressive play and “dummy mentality,” as he calls it, that too often is found in so many adult leagues. (He soon eliminated the children’s divisions due to his disdain for the ‘hockey-parent mentality.’)

Now, at age 52, Dyson has chosen to share his story of how he came back to life with others, in the hope of inspiring children and adults facing hardship to persevere and pursue their dreams. As he tells other aspiring athletes recovering from life-threatening situations, “If the goal is big enough and the will is strong enough, we can accomplish anything we set our mind to do. Don’t let the fear stop you.”

Chris Dyson, president of Puckstoppers, Goalie Genius and JFFHL, is based in London, ON, Canada. He still plays regularly, and is currently writing a book on goaltending to help coaches better understand the position and work more effectively with their goalies. For more information, visit www.puckstoppers.com. 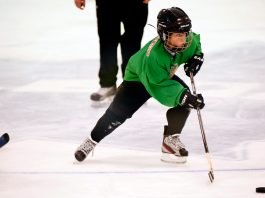 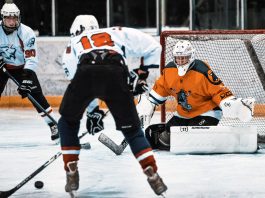 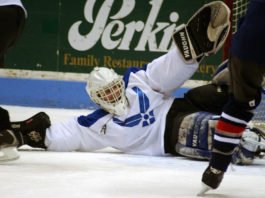