The correct way to cover the point, and proper defensive-zone coverage

When it comes to the concept of cover the point, there are two sides to the debate. If you’re a winger and the puck happens to be in your defensive zone, common hockey wisdom dictates that you do two things: (i) Stay up high to try to prevent the man on the point from taking a shot, and (ii) position yourself along the boards for the breakout.

For those rec hockey players who like to collapse down low to help with the defense, no doubt you’ve heard the shouts coming from the bench imploring you to “cover your point!” But what’s the right way to play it?

Defensemen Can Be Sneaky

If the defense you’re covering at the blueline possesses at least some bit of skill, they’re not going to just stand there and let you prevent them from taking a shot. You can count on them making it difficult to cover your point. Chances are they’ll be skating through the zone, looking for an opening to shoot or make a pass. In the beer leagues, it’s likely that the stronger players are defense, while the weaker ones are assigned to the wings. Defensemen can be sneaky; if you have your back to one they can easily skate around you. This requires you to keep moving and stay fluid.

In this situation, if your team is defensive minded you might be told to position yourself from the hash mark to the top of the circle (rather than at the blueline). True, this leaves the man at the point free to receive a pass and take that shot. But they’re not entirely open. Rather than standing in front of them and waiting, you try to close the gap by skating directly at the shooter.

To Cover the Point Can Involve Blocking Shots

Blocking a shot increases the chance of the puck careening off your shin guards. (For maximum protection against injury, always face the puck shooter.) This facilitates the breakout from your zone. Essentially, what you’re trying to do is force the play to the outside. You are hoping your opponent will make a mistake that you can capitalize on. Getting one up on your opponent is often a result of them making a mistake. Keep the pressure on and your chances of going on the attack will improve.

If you watch the pros play and notice them collapsing down low in the defensive zone and blocking shots, keep this in mind: They’re getting paid (quite handsomely, I might add) to take one for the team. As for the rest of us, well, we all gotta get up for work the next day.

You really don’t want to be a “sitting duck” by giving your point man enough time and space to uncork a slapper at you. To the same effect (for your team’s sake) as taking a slapshot in a sensitive area from point-blank range, try to get right on your point man. Blocking a shot with your shin guards requires that you keep your legs together and your stick free. It should be on the ice and ready to go stick-on-stick to deflect a shot out of harm’s way.

A compromise on the positioning can be achieved by staying somewhere between the hash marks and the blueline, along the upper arc of each circle. You’ll be low enough to disrupt an opposing forward coming out of the corner, but not too low as to be ineffectual against the opposing point man.

Whichever method you choose to employ, keep those feet moving! 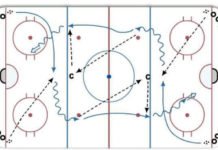 Do You Know Your Playoff Role?