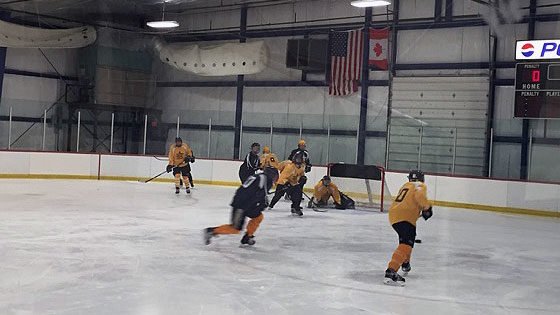 To the visually impaired hockey player, the sounds of the game are the guiding eyes

It’s the slicey-carving and snow spraying when taking a high-speed turn or coming to a quick stop.

The clap-and-boom of the puck hitting the boards on a missed shot or dump-in.

The clacking of hockey sticks fighting for position in front of the net.

The dull thud of layers of padding folding together in a center-ice collision.

The sharply disappointing ping of a shot off the post.

These are the sounds that every hockey player longs to hear. They add a beautiful accent to the game’s already rich sensory experience—to the fully sighted.

To the visually impaired hockey player, however, they are the guiding eyes out there.

I recently added another few beautiful sounds to my hockey auditory library: the tinny smash and rattle of a large steel puck filled with ball bearings skittering across the ice, and the higher-pitched whistle that signals a completed pass to let a player know that their team still has possession.

It started with an invitation to come play hockey with Courage USA, a nonprofit organization that seeks to engage visually impaired hockey players in a fun environment under a set of rules that eliminate nearly every ‘visual advantage’ possible. The face-off is not a dropped puck; rather, the puck is stationary and the draw is taken at the sound of a whistle. Top-shelf shots are eliminated by a black rubber pad covering the top foot of the net. Why? Because the puck, while in mid-air, does not make as much noise, therefore it is tougher for the goalies to save. And no 1-0 breakaways from center ice; players must make a pass after gaining the red line.

Is it still fun with all those rules? I don’t see any form of hockey ever being anything but a blast (except for goaltending, but that’s a story for another day).

I was out there with some very gifted and inspiring players. Some were trying the game out for the first time, while others had begun playing at an early age before they partially/fully lost their sight. And some have played their way into elite levels— and my, have they adapted to the new game! I was burned left and right. I guess I didn’t get the memo that the eyes and the legs are two very different systems!

Since I am a fully sighted player, I was kindly asked not to score. Fair enough, but I was no Gretzky out there to begin with. My dad, on the other hand, is legally blind in one eye, wears corrective lenses for the other, and is colorblind to top it all off. He agreed to play without wearing his single contact lens and was therefore permitted to put the biscuit in the basket. We can all guess who my favorite target for passes was. Dad managed to stash a goal, but nothing came easy in that game, for sure. It was a truly rewarding experience, and one I can’t wait to have again.

Like any community, hockey features all different personalities and characters: good, bad, quiet, sneaky, political, etc… We’ve seen them all. I’ll tell you something about this group, though; they are among the nicest, most welcoming, and most kind-hearted people you will ever meet. And now that Courage USA has the backing of USA Hockey, there is no doubt the sport of blind hockey will gain a wider following.

Whatever your skill level and visual ability may be, show up at one of their events and they’ll take you in with open arms. You’ll be glad you did.