Just like the society we live in, sports are governed by a code of ethics. However, the rules of the game don’t always align with the ones we live by in our day-to-day lives.

In sports, rules are in place for safety of the players, integrity of the game, and to create as fair a competition as possible. But sometimes those rules are broken so egregiously that the rules and laws of our society need to take precedent. And that is especially true for acts of in-game violence.

Committing an act of violence with the intent to harm is one of the worst things someone could do.  Yet, time and time again we see examples of this in the world of sports— Todd Bertuzzi sucker-punching Steve Moore; Kermit Washington punching Rudy Tomjanovich; the Pistons-Pacers “Malice at the Palace”; bench-clearing brawls in baseball; and most recently, the two high school football players who assaulted a referee on the field. Some of these instances had real-world consequences, but the majority of them were handled as “in-house” cases by teams and leagues.

Sure, sports are tense and competitive and things happen in the heat of the moment, particularly in contact sports, where violence is the norm. But where is the tipping point between the ethics and laws of society outweighing those of the game? What is the line that separates unsportsmanlike conduct with a criminal act? When should police, lawyers, and judges be called into action for an act that occurs on the ice, field, or court?

A good starting point is the Marty McSorley incident in 2000: a regular form of punishment for his blatant assault on Donald Brashear wasn’t sufficient, as he used his hockey stick as a weapon to knock Brashear unconscious on the ice. The NHL banned him from playing, and he was given 18 months probation by a Vancouver court.

Clearly in examples like this, when an athlete intentionally harms another player, the law of the land should come into play, if not supersede the rules of the sport entirely. And while extreme cases like McSorley are thankfully few and far between, mere suspensions and fines are not enough of a deterrent against severely violent acts in the heat of the moment.

In most cases, the line between “playing hard” and criminal assault is drawn when it comes to the officials. The rules are different regarding incidents between officials and players, because the two are never supposed to have physical interaction, in any sport. When an athlete has a physical altercation with an official, real-world laws typically take over, just as we saw in the aforementioned case where two high school football players intentionally blindsided a ref.

But, even in cases of athletes coming up against officials, leagues typically dole out the “tougher” punishments, not the courts. And it becomes a difficult situation when the rules of the game do not coincide with those of society.

In the real world, you obviously can’t run full speed across a parking lot and tackle someone. You can’t just start a fight because someone disrespected you. You can’t slash someone with a stick or give somebody chin music for crowding you. But in sports, you can. And that creates a grey area for athletes.

Athlete-on-athlete violence is certainly a part of the game, and in some sports, like hockey, it is actually an integral component. The “heat of the battle” may justify some actions, but that doesn’t mean heinous acts don’t necessitate legal consequences. We have to be careful not to blur the lines between the rules of the game and laws of society.

There are no 5-minute majors in real life.

When a heinous act of violence occurs during a game, the rules of the sport should coincide with the laws of society. Let us know what you think in the comments. 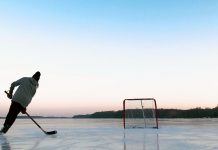