With concussions in the forefront these days, clearer rules for hitting are a must

We’re well into a new season of sports and we look toward a new year. Which is why it’s a great time to step back and evaluate things in order to make some changes and improvements over the next 12 months. The need for clearer rules for hitting is called for like never before.

However, in the world of sports, change is constant and new years come much more often than the first day of January. That means there’s much less time to reflect on the mistakes that plague some sports; they just continue to fester.

Take the ever-changing rules for contact in hockey, football, and other full-contact sports. With the “hit zone” constantly changing and what constitutes an illegal hit becoming more and more ambiguous, players, coaches and fans alike are struggling to keep up. And that’s causing some issues for leagues like the NHL and NFL.

There’s a clear lack of consistency in the officiating of contact. While one officiating crew might call games overly conservative—raising their arm and blowing the whistle or throwing a flag just to be safe, even when no infraction occurs—another may completely miss multiple helmet-to-helmet hits or contact to the head and neck area. This creates inconsistency and poor play across the league, from game to game and week to week. Another important reason to establish clearer rules for hitting.

It’s truly affecting the entertainment value of sports too. Whether it’s sloppy, penalty-filled games that last forever; a call that decides a crucial game; or refs who seemingly make up the rules as they go along, the product of our contact sports has declined. It’s no wonder ratings have been on the decrease this season for the NFL.

Of course, fans are now also more educated about concussions and head injuries, which also changes the way we watch the sports. Hockey—and other contact sports like football and lacrosse—is different than it used to be. The days of punishing hits, teams with nicknames like the Broad Street Bullies, and ESPN segments like “Jacked Up” are long gone.

There’s no doubt that fans and even the athletes themselves—some more vocal than others—miss the hard-hitting, tough, physical play of the past. But the benefits of the changes clearly outweigh the negatives. We all love the big open-ice hits or bone-crunching plays over the middle of the field, but we also now understand the damage those players incur from those hits.

We want our athletes to have longer, more successful playing careers and better health after leaving the game. Whether they’re role players or superstars, no one should have to live their remaining years in constant pain because of the beating they took while playing their sport.
So what resolutions could leagues make? Simplifying the rulebook would be a start.

From players and coaches to fans and even officials, no one appears to fully grasp the rules of contact. The officiating and implementation of the rules need to be much clearer, and everyone involved should be on the same page. No one wants to watch slowed down, penalty-riddled games. No one wants to see inconsistent calls or refs determining the outcomes of games.

If leagues like the NHL, NFL, and contact sports alike want to continue to evolve and thrive, they need to begin closing the gap on officiating by streamlining the rulebook and clearly defining legal versus illegal hits.

Not just for the safety of the players, but for the sake of athletics in general.

Sports like hockey and football need time to reflect and make New Year’s resolutions just like us. Why are the rules on what is or isn’t a legal hit so inconsistent? Shouldn’t there be clearer definitions for the rules? Tell us what you think in the comments below.

Travis Armideo is the Marketing Manager at Gladiator Custom Mouthguards. Republished with permission.

Hockey Talk: The Language of Hockey 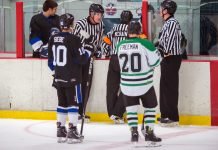