How to increase your endurance on the ice

Stamina is one of the most important physical characteristics in the sport of hockey. Outstanding endurance is a must for every hockey player, no matter what age or skill level. Despite only being on the ice for short periods of time, hockey players push their bodies to extremes as they race across the rink while remaining attentive to the puck, attacking and defending. As a result, a common question arises: How do you increase your stamina for hockey?

Building your hockey stamina is all about mimicking the conditions that your body will go through in an actual game. If you get your body used to short bouts of expending energy and aggressive movement, then you’ll be able to play an entire hockey game without wearing out, no problem. Typically, the average shift in a hockey game is 45 seconds, and a fair estimate for the total amount of ice time a player will get is 20 minutes. Therefore, a player can have upwards of 20 shifts per game! The key to preparing for this? Interval training.

Interval training just means switching between two activities that require different rates of speed and degrees of effort. The cool thing about interval training for hockey players is that it can be done both on and off the ice.

Remember: For any form of training (including those mentioned below), always be sure to warm up and stretch your muscles beforehand to prevent injury! We also suggest you consult with your healthcare provider to determine which exercises are right for you.

An excellent example of on-ice interval training is doing laps of the rink. You can skate either the length or perimeter of the rink as fast and as hard as you can, and then take a couple of slow recovery laps. The sprint-lap mimics your shift during a hockey game, and the recovery laps mimic the time you would be sitting on the bench.

You can also combine this sort of training with an aspect of stickhandling or shooting to turn it into a drill. For example, you could start at one end of the ice with a puck, sprint around a cone and shoot at the far net when you approach close enough. This can be repeated any number of times you’re comfortable with.

There are all kinds of on-ice drills available online that involve aspects of interval training for building your hockey stamina.

The key to off-ice interval training and building your hockey stamina is precisely the same: exercises where you have short bouts of high energy and aggressive movement followed by a recovery period.

The simplest off-ice interval training exercise is running, whether outside or on a treadmill. You would sprint at high intensity for about half a minute and then jog slowly or walk for a couple of minutes to recover. However, running certainly isn’t the only exercise that accomplishes increasing endurance.

You can do half a minute of burpees with a minute of recovery, or half a minute of high-intensity cycling on a stationary bike with a couple minutes of slow-pedaling as a rest period. The possibilities are endless. (The burpee, otherwise known as a squat thrust, is a full-body exercise used in strength training and as an aerobic exercise. The basic movement is performed in four steps.)

If you strive to stay in shape and apply interval training year round, you’ll soon find that you’ll be able to carry the same amount of energy and effort through an entire 60- to 90-second shift on the ice, and through every shift of an entire hockey game. Without a doubt, this can put you miles ahead of your opponents on the ice who will tire out quickly. In turn, you can exploit that weakness and create an opportunity for your team to score!

The Bottom Line: Building your hockey stamina using interval training may just be the difference between winning and losing a game.

Tim Turk, a frequent contributor to CrossIceHockey.com, has been an NHL-level skills and shooting coach for over 18 years. He continues to work with NHL players while making time for minor league hockey teams and players. He runs several camps and clinics across the globe. This article originally appears on his website, TimTurkHockey.com. 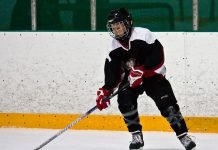