Making the most out of your valuable few pre-game minutes

On game day, preparation begins long before your team hits the ice. Attendance is confirmed and lines are formed. Skates are sharpened and sticks are taped. You’ve eaten the right foods and drank plenty of fluids. But there’s a better pre game hockey warm up you should follow.

The small window of time between when your team first steps on the ice and the sound of the horn commencing the puck drop is when your mental and physical preparation for the game ahead—in theory—collide. The reality is that far too many players neglect to take advantage of this time to dust off the cobwebs from their past few days of sedentary activity.

Rec hockey games tend to begin with close to a third of your bench lined up to jump on the ice when the Zamboni rolls off. As the sheet freezes, you catch a glimpse as the remaining few teammates in attendance shuffle into the rink.

You hop onto the ice and drop your backup stick, water bottle, and towel at the bench, followed by one or two minutes of shameless BS-ing with the guy who skated up next to you. One of you initiates a stretch—a leg up on the boards, perhaps—and another minute or so goes by.

The stretch, an integral part of the pre game hockey warm up, is seldom brought to question. Let’s set the record straight here: there is no pre-game stretch you can do in full gear on the ice that cannot be done just as (if not more) effectively in the hours leading up to the game.

When the conversation comes to a lull you join the carousel of teammates skating around your team’s end of the ice, as if they occupied a Turkish prison. Eventually, your captain emerges with a bag of pucks and each player attempts to pick one up as they skate past the pile. Pucks start flying on net, leaving you no choice but to line up along the blue line and wait for your turn to shoot.

When diced apart it becomes apparent how ineffectual our pre game warm ups really are. Practicing the skills most valued in game play—heads-up skating, puck control, passing, and shooting while in motion—are exchanged for halfhearted stretches, Sunday skates around the zone, and a few clappers on net if you’re lucky.

So we’ve been doing it wrong all along. The good news is there is only an upside to making more out of your squad’s valuable few minutes of pre game hockey warm up from here on out.

A major problem with warming up hard is losing pucks to the other team. In most rec leagues each team supplies their own pucks, so it’s best practice to keep them on your share of the ice. Unless you want to spend those precious few pre game minutes chasing down biscuits, you are going to want to structure your warm up around this. Keep play horizontal—across the ice—so you can work on hard passes without worries.

Of course, the most important player on your team that needs a pre game hockey warm up is the one between the pipes. Traditionally we occupy the blue line (or a semi-circle within it) and take turns putting pucks on net. This custom presents a few major problems. While your goaltender is fielding a number of shots, those shots are all fairly predictable. Continue putting pucks on net, but incorporate an element of surprise for both shooters and your goalie. Within the semi-circle, make a random pass to a teammate who in turn takes a shot. This will not only heighten the awareness of your team’s skaters in the minutes leading up to the game, but it will also force your net minder to scan the ice for shots coming from different angles.

Once your team has proved to be capable of catching passes and releasing quick shots, you can begin incorporating some more involved half-ice drills into your pre-game repertoire.

If your goalie is running late you can still make the most out of your warm up. A great way to get loose is by playing a simple game of keep-away with a partner, which will work on heads-up skating and stickhandling while also working out your teammate’s defensive play, both mid-ice and along the boards. This simple drill can be done in tight space, so multiple pairings can occupy the zone concurrently. While it may seem a bit silly, a game of keep-away will reinforce some of the most important skills you are going to call on in the game ahead.

Lastly, keep moving and be creative. The most important reason for your pre game hockey warm up is to get your heart pumping and your mind prepared for the game ahead. 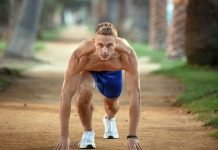